Without question, chocolate is one of the greatest inventions of humanity! It tickles our taste buds in just the right way to make us feel amazing, relaxed, and excited! But do you know where chocolate comes from? What are some countries with the best chocolate? Here are seven countries that make the best chocolate!

Everyone knows what chocolates are

Historically, our desire to satisfy our sweet tooth with bitter, strong, and sweet chocolate dates back to approximately 450 BC Mesoamerica. The first form of chocolate we consumed was hot cocoa. People loved it so much that they even used cacao seeds as a trading currency.

Back then, hot chocolate was bitter, and manufacturers added various ancient spices to it. By the 1840s, England saw the introduction of the first chocolate bar. They were made by mixing sugar, cocoa butter, and chocolate liquor. They started off a sugar-induced craze that continues to this day.

Today, chocolate is available in many variants, and tasting it makes us feel good and relaxed, and it gives us an uplifting sugar rush. Some even consider it to be an aphrodisiac! Moreover, the world chocolate market is nearing a total value of over $180 billion. Plus, people consume over three million tons of cocoa beans on a yearly basis through chocolate products. Most of those products come from several chocolate countries that are famous for their skills with cocoa beans.

It will be hard to miss a chocolate store if you ever visit Belgium! In fact, this small country has over 2,000 unique chocolate shops. It’s considered to be in the top four countries that produce chocolate. This is mainly due to the unique flavors that Belgian chocolate produces.

What makes it special is the actual manufacturing process. Belgian chocolate makers carefully refine the cocoa bean particles to a point where you can’t feel them in your mouth. The trick is to create an ideal balance between soft and hard so that your tongue and mouth can experience maximum pleasure.

Additionally, Belgian chocolate makers use special tempering methods to cool down the chocolate after it’s made. This maximizes its aroma and flavor.

Even if you’ve never visited Switzerland, you most likely know about its legendary chocolate. Lindt and Toblerone are two of the most popular chocolate brands that hail from Switzerland.

The interesting thing about Swiss chocolate is that its superb quality depends on several unique factors. Namely, Swiss chocolates have high amounts of cocoa butter and high-quality alpine milk from Swiss cows. The cows live in tranquil mountain regions and consume an organic grass diet at high altitudes.

Ecuador was the leading exporter of cacao beans for hundreds of years, and it still produces some of the best beans on the planet. It is known for Arriba Cacao beans, which are some of the most sought-after beans that many popular dark chocolate manufacturers use.

In fact, just 5% of chocolate products earn a “Fine Aroma” label worldwide, and 63% of that is produced by Ecuador. Another reason why this country is such a leader in the world of chocolate lies in its location, climate, and terrain. Even though Ecuador has mainly focused on exporting cacao beans, new local chocolate manufacturers have emerged in the past few years. Pacari, for example, is a new brand that stands out. It managed to beat its European competitors by winning multiple international awards.

When it comes to the United Kingdom, we know that you’re already thinking about that dark purple and shiny packaging with the iconic milky-white Cadbury logo on it! The UK is home to one of the world’s most well-known chocolate brands, aka Cadbury. This chocolate company has been around since the 1800s. It was created by two brothers who became so popular that they even served Queen Victoria their chocolate products back in the 1850s.

In 1905, the company started to introduce a higher milk content in their chocolates. This made it taste incredibly sweet and gave it its soft texture that we are all familiar with today. Even though you can enjoy a Dairy Milk bar or a Cadbury egg anywhere in the world, they probably taste the best if you are walking down London’s anonymous cobblestone alleys or iconic scenic streets.

Côte d’Ivoire is the biggest producer of cacao on the planet. In fact, it produces over 38% of the planet’s cacao beans. It exports nearly two million tonnes of beans every year! This means that many of your favorite chocolate brands use beans from the Ivory Coast. That includes Hershey’s, Nestle, Cadbury, and many others.

Furthermore, as a result of supplying the world’s most notable chocolate makers with the tastiest cacao beans, the country’s economy is highly dependent on its crops. Cacao sales make up 40% of the country’s export income. Plus, the cacao industry employs over six million people.

Surprisingly, the African people that produce it consume fewer than 4% of chocolate on the entire planet. Additionally, just like Ecuador, the country began to produce its own chocolate fairly recently. The most famous brand is Instant Chocolat.

The setting is quite clear here: a picturesque cafe in a lonely Italian town, a small cup of hot espresso, and a glistening piece of sweet Italian chocolate! While this country’s chocolate production is not as well-known compared to Belgium or Switzerland, fine Italian chocolate is definitely something that you shouldn’t miss out on.

Italian chocolate is made in various towns and regions, including Sicily, Perugia, Turin, Piedmont, and others. The most famous manufacturer is probably Ferrero, and most people know it through products like Nutella, Ferrero Rocher, Rafaello, and Kinder Bueno.

However, it’s best to see Italy’s chocolate tradition in person, especially if you can visit some of the most popular chocolate-making regions. For example, Sicily is known for “cioccolato di Modica,” which is crumbly and gritty. In Turin, you’ll find a local favorite — Gianduiotto chocolate. It contains a mix of Piedmont hazelnuts and cacao beans.

Finally, the U.S. is home to the world’s biggest chocolate manufacturers. One of the unique things about American chocolate is its frequent addition of almonds, peanuts, and caramel. While the States are full of small artisan chocolateries, we can’t ignore Hershey’s. This company is the largest chocolate and candy producer in the U.S. It was founded in Hershey, Pennsylvania, and this town is also home to several notable visitor centers like Hershey’s Chocolate World and Hersheypark. 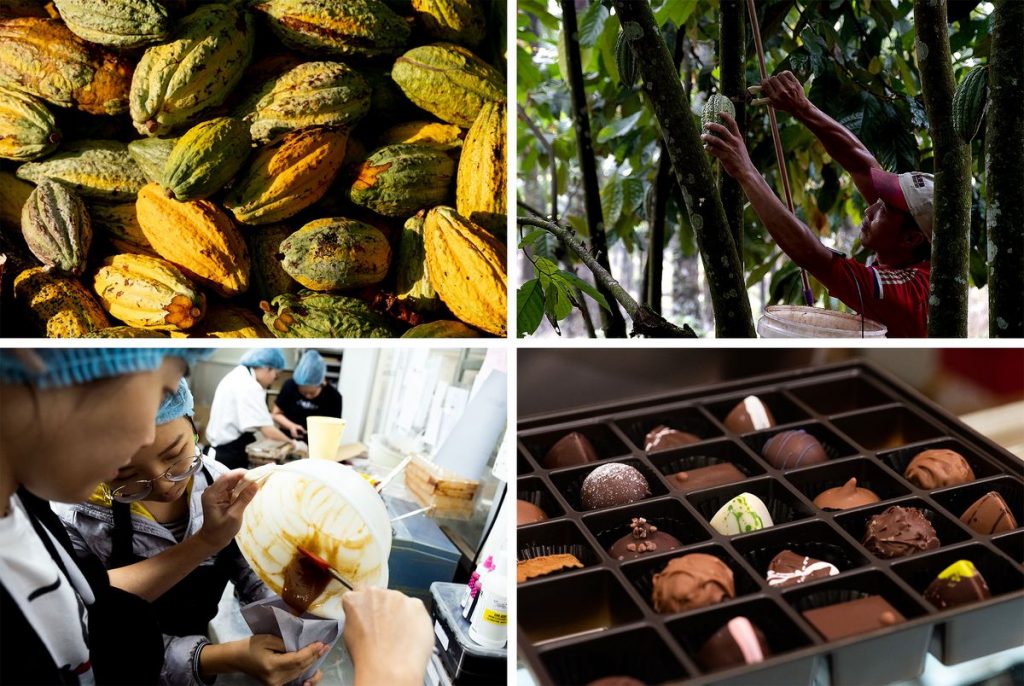 Unfortunately, not all chocolate aficionados love American chocolate due to its slightly tangy and even sour taste or smell. This is mainly due to a special lipolysis process that most manufacturers allegedly use during production. The process adds butyric acid into the chocolate mix. This substance is also used in the manufacturing of parmesan cheese, and interestingly, it’s also present in vomit. Still, the US offers so much variety in its chocolates that there’s something to be found for everyone!

That’s it! What is your favorite chocolate manufacturer? If you are feeling adventurous, it’s best to sample some of the world’s finest chocolates by heading out on the road and visiting some of the most famous chocolate-making countries! Enjoy!